I gloated too soon about the onions. The red Spanish onions have onion white rot - or at least some do.
That's a real pain, as it can take 15 years for the soil to recover, and in the meantime you can't plant onions in the infected area again.
After much research, I was stricken with the dreaded Gardener's Panic and dug up a garlic bulb to see if it, too, was infected. But it was fine, except for the tiny detail that it had been dug up way too early. It was small if perfectly formed, and it does look like garlic, so I'm acting like it's my first-born. Which, in a way, it is.
My onions, of which I was so proud, have also got fat necks. Unlike rugby players, onions are not supposed to have fat necks, I now discover, and the list of things I might have done wrong to bring about this disaster is a litany of sins:
- Plant too late
- Not enough water at critical times
- Too much wind.

Of course, as they are red onions this isn't such a tragedy , as they aren't made for keeping. If they were brown onions destined for storage, it would be tricky as the fat necks apparently consign them to some unspecified doom.
As it is, the onions taste fine, fat necks or otherwise.

Live and learn.
Posted by Kelly Gardiner at 11:05 AM No comments:

Things I have learned this winter and spring:

• There is no such thing as a rabbit-proof plant*, with the possible exception of bearded iris**.
• Slaters like beer, just like snails, and die happy. Sadly, they also like seedlings.
• Very small kittens can take on very large rabbits and win.
• If you buy a bunch of spring onions at the supermarket, even if they’ve been in the fridge for a while, and stick the leftover ones in the garden, they will just keep growing.
• Parsley, even when not moved as seedlings, can go from baby leaves to bolt in about a week. Who wants to molly-coddle their parsley? (On the other hand, I do have a self-sown one flourishing in the driveway gravel – gardening is so random sometimes.) And ringtail possums love it.
• Raspberries will flower in the first year.
• Pear trees will not (and not much in the following year, for that matter, but I do have one centimetre-long Buerre Boscs so far this season). Cross-pollinators don’t always flower at the same time, but it somehow worked anyway.
• Roses are actually tough as old boots.
• Broccoli can be too – but when being eaten, not growing.
• Never think “Those cherries are coming along nicely - I’ll put the bird netting on at the weekend”. Your tree will be stripped by then.
• Sugar cane mulch actually stops water getting through to the soil.

Pleasant surprises
• All the alliums seem ridiculously happy in my veggie patch: red onions, garlic, leeks, chives, garlic chives, ornamentals – all booming.
• Broad beans are going nuts, in spite of being badly mauled by slaters.
• Broccolini, as opposed to broccoli, grows like the clappers and tastes sublime, though it can be very hard to find in the first place.
• The rhubarb inherited from my dear late great-uncle (who could grow anything) divided into three crowns and thrives in his honour.
• Waving poppy seed heads around in the air one year creates poppy heaven the next (only I think they might be opium, so too many more and it’ll look like Afghanistan).

And I know it shouldn’t really be a surprise, but you’ve never tasted food as good as food you’ve grown and picked just before you eat it.

* Allegedly rabbit-proof plants include rosemary, grevillea, lavender, correa, borage, comfrey and succulents of all sorts. I’m a witness to the fact that rabbits will eat any or all of these, even when there is plenty of other green stuff around. Correas are simply pudding.
** Irises, however, are not sheep-proof, as I have learned to my cost in my country garden, but that may not concern too many gardeners.

(Cross-post from Ocean Without End.)

PS I also learned the hard way how profoundly grevilleas detest fertiliser.
Posted by Kelly Gardiner at 11:02 AM No comments:

I've bought a red wheelbarrow. $15 at a garage sale.
I already have one ($20 at a country auction), but you really ought to have a red one, because...

so much depends
upon

beside the white chickens.

Home sick today and just as well.
Not one, not two, but three striated pardalotes took it into their tiny brains to explore our roof cavity - they have been nesting under the eaves for weeks - and fell out a small hole in the ceiling and onto the dining room table.
One landed on the cat's head and was in Tom Kitten's mouth before I knew it. The astonished cat reacted on instinct and then had no idea what to do.
All three flew to freedom, with a little help. Even the chap clasped in the cat's jaws.
Then I spent half an hour watching an echidna potter around the backyard, happily going about its ant-eating business.
Pricked out the seedlings at the weekend: Mexican Midget and Grosse Lisse tomatoes, Long Purple eggplants, and millions of sweet basil. Sown in my funky new propagator. Now all in peat pots - I'll put them into the ground in a couple of weeks when I know they'll be more likely to withstand the inevitable slater onslaught.
Posted by Kelly Gardiner at 5:54 PM No comments:

We bought the place - love at first sight - several years ago.
We lived in a different city at that time, in the Royal National Park south of Sydney, then moved to New Zealand for a few years, to Waiheke Island. We always seem to live in beautiful places, though this is the best of all.
It's a cluster of three 1960s mudbrick buildings on the banks of the Yarra, which look out over the river to Warrandyte State Park.
We finally moved in last year. The house had been rented out, by then, for five years. The banks were over-run with blackberries and ivy, the original garden beds thick with weeds and dead roses and bare patches, rabbits and foxes had the run of the place - three years of drought were thick on the ground. 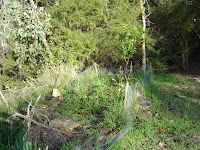 This is the story of rebuilding a garden in the bush. Hopefully it will have a happy ending.
Posted by Kelly Gardiner at 4:40 PM No comments:

Newer Posts Home
Subscribe to: Posts (Atom)
If you have a garden and a library, you have everything you need.
- Cicero