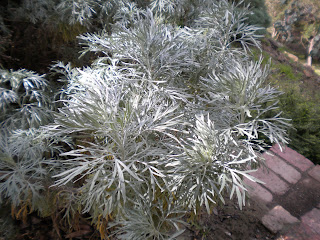 - Light coloured foliage can give a sense of depth to your view of a garden
- It is easy on the eye and cooling, especially on hot summer days
- It helps blend flowers and foliage colour that almost, but not quite, go together, such as different reds, crimsons and scarlets; or purple and blue
- It works well as a contrast with dominant colours such as a deep red
- It can spotlight dark corners or shaded spots under trees
- Plants with silver or grey foliage tend to cope well with summer heat and dry conditions
- White works beautifully in the evenings
- In its own right, white is a glorious thing. 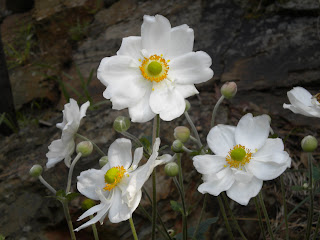 (Above: Japanese windflowers - Anemone x hybrida - in a dark spot under a rock bank)

In The Sensuous Garden, Monty Don points out that most white flowers are not actually very close to pure white at all. Anyone who has ever had the misfortune of trying to choose a white paint from a colour card will understand this.

"I'll just paint it white," you think. "Simple." Oh no. No, no, no. There are whole colour cards in your paint shop of different shades of white; some yellow, some verging towards blue or pink; some warm; some cool; some cream, ivory, chalk, almost yellow. 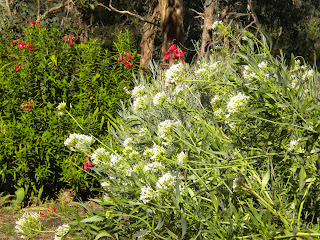 (Above: White valerian mixing with red penstemon and English lavender)

Plants are the same, and of course when it comes to white flowers you are also dealing with something that is, let's face it, almost entirely green with white dots (and even those dots might be dotted with yellow or splashed with red). Convulvulus cneorum, otherwise known as rabbit's dessert around here, is both a lovely soft silver foliage with sharp white flowers, but more often you will find the lovely white flowers set against a deep green - for example on a Cistus ladaniferus (Rock Rose), on which you also get a deep red splodge.

You will have heard and seen photos, no doubt, of Vita Sackville-West's White Garden at Sissinghurst, with its white, cream, silver and grey plants. It wasn't the first single palette garden, but it is certainly one of the most famous, and it spawned a generation of copycats (fair enough, too), though this has made some gardeners wary of using much white.

But don't be afraid. Splash a bit around, like eau de cologne, and enjoy the light.
Posted by Kelly Gardiner at 4:46 PM No comments:

Just realised something: after months spent clearing leaf litter and debris in a vain attempt to become fire ready, I had completely gone off gardening. (Don't worry, it's just a phase.)

The bush backyard had become a chore, almost an enemy to be conquered, and as one can never really be fire ready, it seemed we had been defeated.

So I surrendered, somewhere in late January, and have barely lifted a finger since.

That said, summer isn't the best time for gardening in these parts, anyway, because the ground is like concrete and the days are simply too hot to do much. You can't plant anything, all you do is keep things alive. It's a bit like winter is for gardeners in the northern hemisphere, or the wet season in the tropics (although in the tropics, I gather, most of your effort goes into preventing plants from growing too much or where they aren't wanted).
Here there's just lots of watering in the early mornings and the occasional dabble in the veggie patch of an evening, to keep production ticking along. 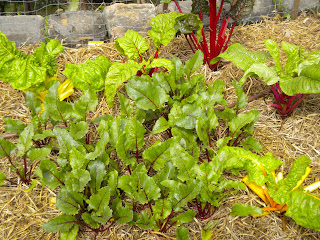 A tangential realisation is that much of our gardening media, and many books, are all about worst case scenarios. Doesn't matter whether it's about indigenous plants or edible plants or exotics. You get a description of the plant and then a long list of all the terrible things that can go wrong, and another list of all the things you have to do to it over its lifecycle. As if you don't have a life cycle yourself (some of these authors clearly spend more time in their gardens than any normal person, and forget that most of us have a few hours a week, at most, spare for this sort of shenanigans).

An example: lots of articles or books about summer fruit will basically tell you not to bother trying to grow apricots because they are too hard.
Let's just think about that. When I was a kid, lots of suburban houses had an apricot tree in the backyard. The fruit was so plentiful everyone made jars and jars of jam. We had them in our lunch boxes. Sometimes they were a little bug-spotted or small, but still delicious.

Now you buy a handful of apricots for some exorbitant price once or twice a summer, and make jam from the dried fruit because it would be ridiculously expensive to do otherwise.

How did we get here, from there?

Is it really so hard to grow an apricot tree? Clearly, no. Our parents and grandparents didn't have Dynamic Lifter or Pyrethrum or Seasol. They didn't have new hardy varieties and modern rootstocks. At most they had a few cow pats from time to time and some hideous chemical sprays (but only the serious growers used them). Most of them just let nature take her course.

The main issue with apricots boils down to the fact that they blossom early, so the chance of frost at the critical moment is greater than other summer fruits.

You read on: it says you have to run out every cold night and swathe your tree in horticultural fleece in winter and net it in summer. You have to spray it with this and sprinkle it with that. You have to prune it and coddle it and hold its hand.
You see these pages of instructions and threats and think at the very least: I'd rather buy a bag of apricots for five bucks once a year. It just sounds too hard.

If you love apricots, grow a bloody tree. It's not that hard. Know that once every few years you might not get a crop because of a badly timed frost. You'll cope. Every other year you'll have a tree full of fruit.

It's the same with everything. Sure, you can fuss about and spend your whole life dead-heading and fertilising and applying this or that.

Or you can just help nature along from time to time. Most plants don't want anything more.

If the birds help themselves just a little too much, the next year you can bung a net over the top. If something starts to dramatically affect its chances of survival or production, then, sure, intervene. (That's when you check back with the article or book for a bit of guidance.) Chuck it a handful of poo or slow-release pellets once in a while. Cut off dead growth if there's any.

And let it live its happy little productive life as best it can.

Who could ask for anything more?

PS On the Italian Food Safari last night, my tomato theory was upheld. They like it dry. It's also better for the flavour as it releases the sugar in the fruit. So there's my scientific evidence: Guy Grossi says so.
Posted by Kelly Gardiner at 10:22 AM No comments:

I have tomato issues.
I also have tomato theories. They run like this: tomatoes are a bit like fine wine grapes. They like a bit of rough treatment. No molly-coddling.

Tomatoes need regular water and the occasional feed but what they want most is sun.
I don't hold with the school of thought that pours water onto tomato vines. Even less with the greenhouse-bred sort. I know I'm not alone in this.
I reckon tomatoes like it dry. It toughens up the plants and gives body and flavour to the fruit.

Many of the diseases and pests to which tomatoes fall prey can be triggered by too much water, or indeed too much fertiliser, which leads to a great many leaves and plants like Jack's beanstalk, but fewer fruiting flowers.
And anyway, I'm too lazy and there isn't enough water to keep them moist.

So then we get these sudden downpours. Not just one, but several. It's a shock to humans, since we aren't used to seeing that much water falling from the sky at once anymore, but it's more of a shock to the tomatoes.

Going from dry to sodden can have all sorts of effects:
That's what's happened here, anyhow.
Too much rain is worse than not enough. The water somehow makes the tomatoes watery. I have no scientific evidence for this whatsoever, besides my tastebuds. But there you go.

While we can't do much about the downpours, besides harvest as much of the water as possible for later use, we can:
Given that it's well and truly autumn, if your tomatoes have finished setting new fruit, you can actually pull out the plants and hang them up (upside down) somewhere dry to let the fruit ripen of its own accord.

By the way, at 7.30 on SBS's Italian Food Safari tonight (1/4), Maeve O'Meara gets stuck into tomato day with an Italian family and it's all about tomatoes. As it should be.
Posted by Kelly Gardiner at 5:46 PM No comments: