Cruden Farm, Dame Elisabeth's lovely country garden (albeit now in the suburbs of Frankston) is open tomorrow, August 30. While the Walling walled garden will be bare, the lake will be ringed with hundreds, maybe thousands, of daffodils, and the camellias and magnolias (I fondly recall this gorgeous M. stellata) will be in full bloom.
Anyway I love seeing the bones of an old garden in winter. Serious gardeners will spend time admiring the leaf mould composting bins, if nothing else, and 100 years notwithstanding the National Treasure herself is usually on hand to sign books and answer questions.
Bless 'er. And her gardeners.

Growing organic fruit and vegetables in Nillumbik
Presented by Sustainable Gardening Australia (SGA)
Come along and learn about growing your own food under Nillumbik conditions. The workshop will cover ways to deal with gardening issues particular to Nillumbik, such as Nillumbik soils, possums and shading. Find out which vegetables grow well in our area and learn about effective irrigation strategies.
Date: Saturday
3 October
Time: 10am-12noon
Cost: free
Venue: Edendale Farm, Gastons Road, Eltham (Melway 22 A1)
Bookings: Georgia Ramsey, Environment and Strategic Planning, on 9433 3210

Edendale is well worth a visit anyway, if only for its splendid chooks and feijoa hedge.


[Later] I found some photos of Cruden Farm in late winter, from my visit there in 2007 or so.

Blossom in the home paddock

The house from the old walled garden originally designed by Edna Walling.

Lakeside daffodils by the armsful.
Posted by Kelly Gardiner at 1:21 PM No comments:

Is it still winter?

Apologies for the hiatus: I came down with the dreaded swine flu and haven't even looked at the garden for weeks.
That means I'm way behind with my spring preparations, but today is the day. I'll be starting all those things I really ought to have done weeks ago. If you've already done all this, like a normal gardener, the list won't be much use, but here's what one should do in July/early August in a cold-to-Mediterranean climate:
- Prune roses
- Weed, weed, weed, especially the annuals before they set seed
- Cut back the raspberries (again - I am only guessing that's the right thing to do, since here are no instructions on what to do with raspberries that accidentally fruit in winter)
- Mulch while the soil's damp
- Get the backlog of new plants into the ground so they have a chance to establish before it gets too warm and dry: I have a few more ground-covering Grevillea Poorinda Royal Mantles, and a whole stack of things I've propagated from cuttings to fill holes, such as pineapple sage and wormwood.
- Stick some garlic cloves in the ground for next year's supply (so easy and SO satisfying)
- Install another water tank.


The must-do things I really can't do now because I've missed my chance, are:
- Move or plant any deciduous shrubs or trees
- Spray nectarines with Bordeaux or a copper-based fungicide before bud burst.

My genuine late August jobs include:
- Fertilise bulbs (to provide nutrient stores for next year)
- Dig over and fertilise/compost/lime (depending on what's going in next) the veggie patch
- Patching the new "lawn" over which visitors repeatedly drove heavy cars the other day, just when it was looking like it might actually become grass
- Spread fresh pea straw onto the veggie patch.

I'm not going to bother with growing tomatoes or eggplants from seed this year, but I will clean out the propagating kit for basil and lettuce. 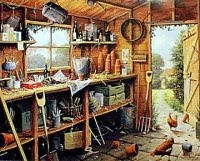 (Image from Organic Gardening 101 group on facebook)
I'm also going to attempt to move the passionfruit vine to a patch with greater levels of sunshine as it hasn't set fruit at all in its current spot. It may not survive, but I think it's worth a go. I'll plant an old-fashioned jasmine to climb up the deck where the passionfruit is now.

Then there's a vast amount of work to do in bushfire preparation, clearing dead scrub and crap accumulated over the decades just below the banks around our buildings and lying like piles of kindling. I started clearing the old blackberries canes and junk before I got sick, and discovered gorgeous and enormous rocks lying under knots of ivy, open spaces that were revealed as views from the house by just an hour or two with the machete, and even an old rambling rose that had been hidden for years. It's a voyage of discovery.

And while I'm out with the chainsaw, that monster hebe has got to go.

But while I wasn't watching, the rhubarb's gone crazy, the broccolini has burst into flower (not good - makes it woody) as has the kale, the rocket has as always taken off, broad beans have come up nicely, my artichokes are looking majestic, and the beetroot and rainbow chard are doing very well. All with no recent help from me whatsoever.

I could put it down to my superior planning and preparation, but I think it's just nature taking its course. Which should be, after all, the whole point of the exercise.
Posted by Kelly Gardiner at 8:32 AM No comments:

The warmest winter for a million years. Looking forward to the driest summer.
The world's gone mad.
At present the wattle's out all along the river, and in the garden we have jonquils and daffodils and magnolias. The broad beans are coming along, kale and rainbow chard doing nicely, broccolini just heading, rhubarb gone nuts and the raspberries looking lovely.
One of these things is not like the others.
Yes, I said raspberries.
What are they doing setting fruit in the middle of winter? You may well ask. I don't know.
How are any of us supposed to forecast even the most obvious growing questions in conditions we've never experienced?
Posted by Kelly Gardiner at 3:49 PM No comments: