Not long after we moved into our house, and well after a great deal of garden planning had taken place, I was shocked to learn that my partner hates purple flowers.
How is that possible?
I don't know, but then since I can't bear a great many pink flowers I guess I have to concede the point, especially given that irises, lavender, rosemary, violets and pansies are exempted from the ban. And some purples are really too harsh - metallic, somehow, like that nasty little hebe I pulled out this afternoon.
But it came to light after I had planted the indigenous climber Hardenbergia all along the driveway. (I didn't own up, but luckily the rabbits ate them all and destroyed the evidence.)
Rather more disturbing was the fact that all my life I have wanted a Tibouchina, and was thrilled to find not one but two here when we bought the house.
"They'll have to come out," I was told, in no uncertain terms. 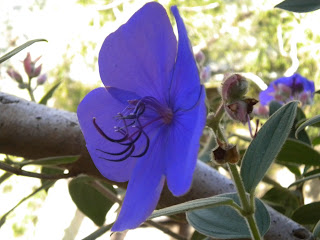 Well, three years later they're still there, hanging on, and instead of trying not to be noticed keep putting on a fabulous show and spreading deep purple petals all over the place, and attracting far too much attention to their purpleness.
No flying under the radar for a Tibouchina. And why would you? Flaunt it, I say.
But for new planting, things can get a little touch and go. After all, the line between blue and purple in the flower world is very fine sometimes. I am occasionally heard to claim: "But it's blue! Honest."
An indigo salvia is, apparently, on the wrong side of the borderline. On the other hand, it turns out bulbs of any kind are also exempt, which is lucky, as I have a weakness for crocuses. 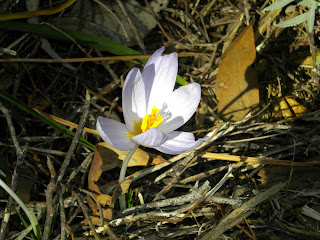 I love a deep purple (iris, say) near bright red (penstemon or salvia, perhaps), or mixed in with a sunshine yellow.
Monty Don claims in The Sensuous Garden that purple "allows other colours to show through more powerfully". Sometimes. On the other hand, in Peaceful Gardens, Stephanie Donaldson recommends a mixture of blue, purple, white and pink to create a relaxing, soothing palette.
I often find the purples in indigenous plants (besides the odd emu bush) to be a rich, deep bluey-purple, or a soft mauve (Westringia), which work beautifully with the blue-grey of the eucalypts in a bush backyard.
The Westringia seems to go unnoticed by the Purple Planting Monitor.
For now.
Posted by Kelly Gardiner at 5:54 PM No comments: