Yes, it's cold. It's wet. But it's a great time for planting and fertilising: the soil's still warm, there's rain falling - for once - and plants have plenty of time to dig themselves in before spring and summer.
Today I've put in:
Two red flaxes (replacements of summer tragedies)
Two dryandra (ditto)
Columbines to test if they are really rabbit-proof - I should know by morning
A pomegranate tree
Salvia Okata gold
Several society garlic
More correas, kunzeas, Swan River peas and a small grevillea that might be a mistake as it turns out to need moist soil.
All of the above were bought for almost nothing at the Molesworth Annual Sale ladies stall or the sale at the good old Kevin Hinze Gardening Centre in Doncaster.
I've divided the acanthus, moved hellebores, and rescued the daylillies, white evening primrose and Shasta daisies that have been eaten to the ground (again).
And I completely forgot to put in the pile of bulbs still sitting by the front door so I'd best get onto them next weekend. I did manage to pot up some jonquils and tulips. And I stood about looking for a spot to plant the quince tree, which had seemed like a good idea at the time. It might have to go in the country garden instead.
It was cold and muddy and dripping rain and so much fun. So get out there.
Posted by Kelly Gardiner at 6:12 PM No comments:

The chooks have arrived.
They have been greatly anticipated, with the chook run construction taking place spasmodically over several months.
All I had to start with was my Uncle Phil's homemade galvanised iron tin, in which we used to carry the chook food down to his henhouse when I was little. I inherited it. He had great chooks - about a million Leghorns, or so it seemed. He used to let us gather the eggs in the mornings.
Anyway, I'm not sure he'd approve of my handywork but it seems to be standing up so far.
We bought a ready-made fox-proof chook house (timber and aviary wire, with colourbond roof). We have no fences, plenty of foxes, and people walk their dogs off the leash along the road and beside the river and anywhere they like on our block. So a bit of a run is critical, and they will have to be in a tractor to free range (not that it's particularly free).
There was a great deal of agonising about how to make a run without digging postholes, as the areas of flat ground are limited and mostly carved out of rock. In the end, the answer found me. There were a whole stack of timber poles by the side of the road for the council's inorganic rubbish collection (one of my favourite times of year). I threw a couple in the car and then just had to buy some wire and a few nice solid boards for a kind of kick board along the bottom.
We decided on a spot up against the wall of a building(my office, once a potter's gallery and studio), offering shelter under the eaves and from the wind.

Building the chook run
So, the poles are attached under the eaves in a sort of lean-to, and dug into the ground just a few inches. The chook wire is then stretched tight across these and attached in a range of unique and possibly sculptural (in other words, dodgy) ways and means to the building, which is mudbrick and it's therefore impossible to actually fix anything to it.
Then over that wire I stretched a less taut layer of finer wire I had laying about. It will flap and bend if anyone tries to climb it, which is often enough to put off foxes and cats.
On top of the wire went the kickboards, attached to the poles, for extra security.
That wire also stretches outwards about two feet, so no-one can dig under it. And on top of that is a line of cement bricks (hollow ones, you know the sort) which I filled with potting mixes and which now feature a range of seedlings: borage, nasturtium and Flanders poppies. So if a fox manages to dig under the two feet of wire, he'll get a brick on his head.
What a palaver. 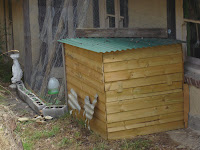 Chook accessories
Then of course you need feeders, straw, pellets, scratch and grit. All before you've even sighted a chook.
No chook house would be complete without two corrugated iron chooks on sticks and a baroque Italian concrete fish, which I've had for years and is one half of a bird bath - the other half sadly broken by an over-enthusiastic Jack Russell who shall remain nameless. It may be just a little OTT. We don't do minimalist here.
Then you need to spend hours happily researching breeds and needs. We were going to get rare breeds especially chosen on aesthetic as much as productive grounds, but in the end we just went for the closest, the Research Poultry Farm: two point of lay hens, crossed between New Hampshire Red and Rhode Island Red; so nice dark feathers, not too big and should be prolific layers.
They were initially named Cluck Norris and Feather Locklear, which I thought hilarious, but Her Indoors has decided they look more like Red and Ginger, which is, after all, easier to say.
I jokingly opened the flap of the nesting box this morning and lo and behold! An egg.
We weren't expecting any egg action for weeks.
Not bad going.
Of course they are already producing poo at a great rate too, which will save on the Dynamic Lifter bills.
At this rate I estimate they'll pay for themselves in twelve years. 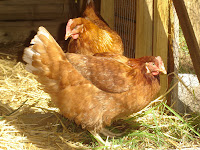 Posted by Kelly Gardiner at 5:00 PM No comments: