The tomatoes have gone crazy.
And so it begins.
You know how in all those gardening guru books - or indeed gourmet guru books - they tell you that home-grown fruit and vegetables taste better than anything you can buy?
Doesn't matter how many times you hear that or read it, nothing prepares you for the flavour of your very first home-grown tomato.
Or the next four hundred, for that matter. 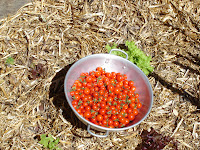 And I can't even begin to describe the taste of my first season's raspberries.
Last year - the first summer here - I did very well with Sweet Bite cherry tomatoes, lettuce, basil, and those lovely small Lebanese eggplants. Silver beet and rocket came out of nowhere (I didn't sow it) and lasted through the hottest summer for decades.
Not so good with beans and the peas were hopeless.
Over the cooler months, I had a lovely long run with broccolette, and I accidentally grew a terribly impressive cauliflower. I bought a mixed punnet of brassicas (won't fall for that again) and for several months I peered closely at the stem of the largest plant waiting for Brussels sprouts to appear. They never did, but I know brassicas can take a while so I was patient. Then one day I was chasing a white cabbage moth and separated the leaves on top and nestled in there, to my enormous surprise, was a perfect white cauliflower.
Harvest is terribly exciting. Will the novelty ever wear off? O, the pride - verging on conceit - the wonder of it. O, the heartbreak when it fails miserably.
Digging up onions and garlic, or breaking off rhubarb stalks, I stare at them, utterly amazed that they look just like the real thing. In fact I can stand for immeasurable hours gazing at the vegetable patch, or even someone else's, like the marvellous potager at Heronswood. 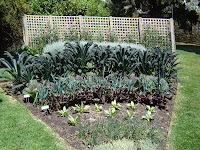 Last night I ate the last of my broad beans and a few raspberries and was ridiculously happy about the whole thing.

PS The big news, though, is that the olive tree looks like it will recover. I admit to checking it every hour last weekend, and I swear it has a new leaf this morning.
Posted by Kelly Gardiner at 2:52 PM No comments:

A couple of months ago I transplanted an olive tree. I had to. It's about six feet tall and has been that high since we bought the house six years ago, but it's had five years of neglect while the house was in other hands. When we finally moved in last March, the olive was half-covered in ivy and was growing, spindly and grey, in the shade, almost sideways due to the pressure of the world's largest hebe. It did fruit last season: sadly, four olives do not a tapenade make. 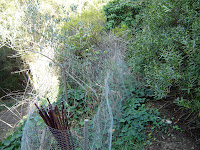 So I dug it out, brought it up the hill to a specially created mound near the kitchen garden, straightened it up, staked carefully to try to keep it upright, trimmed just a little, manured and mulched, and stood about staring adoringly.
Then we had an unseasonal hot spell, followed by gale force winds, storms and even hail, and since then things have looked grim. The poor thing started to look ever more silver (as they do under stress - silver being the first step on a possible road to brown and then dead). Then the curled-up brown leaves started appearing. Condition critical.
But we are fighting back, that olive tree and me. I've cut back the light growth that looked as if it was dying back, and it's had two weeks of molly-coddling (seaweed fertiliser, extra soil around the base to counteract the wind, more manure and mulch, plenty of water whenever the law allows). I've even taken to stroking it and whispering encouraging sweet nothings, and planted another olive nearby partly as company and partly as insurance.
It's looking a little better. Condition now stable but still serious. I can't tell you how I know, I just know.
If it ever throws out a new bud I'll notice immediately and then it'll be party time.
Not one for half-measures, I'm now convinced I ought to take up olive growing. Not full-time - yet - but one day and part-time. A few acres in the country, a couple of hundred trees, friends around to help pick, as I have done for others; my own oil and olives year-round.
(The fantasy is spurred on by reading Mort Rosenblum's Olive and spending a couple of years living on Waiheke Island, home to many of NZ's great olive growers and where there is even an annual olive festival.)
As if I haven't got enough going on already.
Posted by Kelly Gardiner at 8:21 AM No comments:

The cry rings out regularly at our place:
What bastard ate my …

Usually the answer is clear. It’s Warren.
Warren is any or all of the rabbits that lurk down the back. Other people have fairies at the bottom of their garden. I have Warren.
So almost every day, it’s “Warren, get the hell out of there!”
I don’t poison Warrens, I just shout a lot.

Then there’s Kevin, the collective name given to every possum in the place, ringtail or brushtail (it’s either Big Kev or Little Kev). They were named, may I just say, before the Kevin Ascendancy in Australia. Kevin may be guilty of ravaging the lemon tree last year, and since we’ve removed a whole lot of feral cherry plums we can probably expect more damage from hungry Kevins this summer.

Someone – possibly Kevin, or possibly cockatoos that have underestimated their own weight – has also been breaking shoots and branches off the roses in one garden bed. Not eating them, just snapping off the spindly growth – or, in one case, the entire top off a standard David Austin.

To stop the behaviour, you have to understand it, and that’s inexplicable. My current theory is that Creatures Unknown are landing awkwardly after leaping from nearby eucalypts, so I’ve run a light, one metre brush fence behind the bed to see if it helps protect them.

But the raspberry thieves were a mystery. These are inside the kitchen garden fence, and netted since the moment they flowered. And yet several of the higher fruit – my first ever raspberries – are half eaten, clearly pecked through the net, while some of the lower fruit have been picked quite cleanly.

So I crept out this morning to see a magpie sitting on the fence poking his long beak through the net.

Clearly my netting technique needs adjustment, and I now know not to plant anything too delicious next to the fence.
I may have to resort to a scarecrow.

As for Warren, there’s not much to be done. I can’t fence the whole block as it would cost more than the car. People have suggested various measures (coffee grounds, blood and bone) but nothing works except a fence. So the veggies and fruit trees are fenced but I’m buggered if I’m going to live with wire everywhere.

I have now conceded defeat and put up temporary wire fences in some areas - these are dead ugly but we just have to live with it for a season or so. Single specimens such as grevillea or westringia are bagged, which also protects them from frost. Once things grow bigger they seem beyond Warren’s terms of reference, although this does not apply to daylilies. Warren is partial to red daylilies. He hasn’t even nibbled on the yellow ones.

Happily, the kitten is a sworn enemy of Warren and even though he’s only a year old, seems to take his Lord of the Jungle duties very seriously. We quite often find bits of Warren scattered about, for which the kitten is applauded – except for the time we found Warren’s guts on the laundry floor. One wonders where the rest of Warren has gone. And then one decides not to ponder that matter too deeply.

I’m really rather Darwinian about this beast versus beast battle. The kitten wears a bell to alert birds of his presence and is locked up at night to protect Kevin. So far he seems to be only successful at catching Warren, although not fast enough for my liking.

And for my part, while an AK47 would be much more satisfying, shouting at Warren at least makes me feel better.
Posted by Kelly Gardiner at 8:06 AM No comments: